Incapsula service was detected. What should I do to disable it?

Incapsula is a well-known and frequently used tool in the world of CDN. By means of its enterprise-level security measures, this service will obstruct the migration, so you’ll have to disable it. For this purpose, contact your hosting provider or do it manually, if the web store is hosted on your own server. To turn Incapsula off, follow step-by-step instruction listed below: 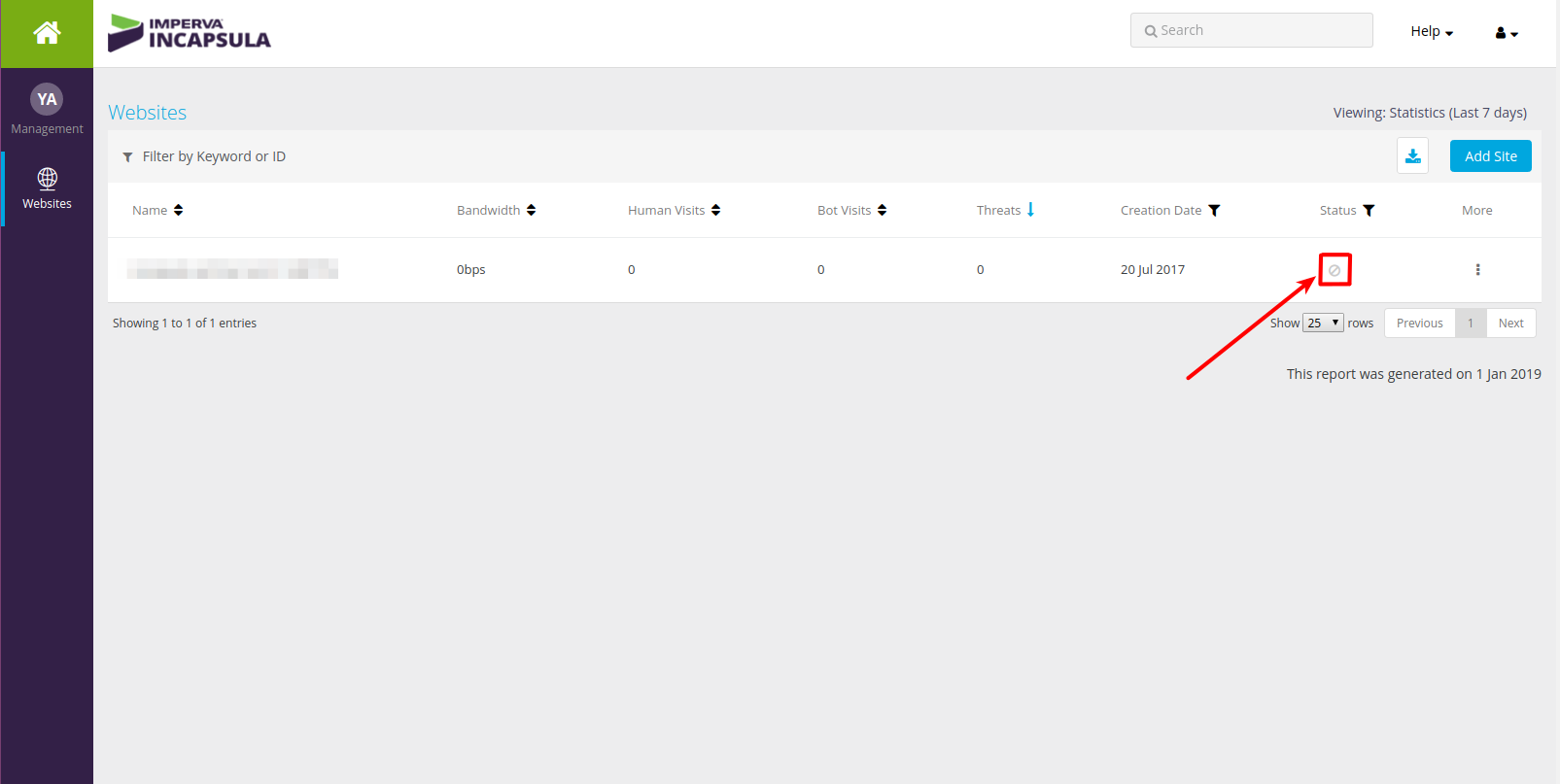 I keep getting the “Internal error occurred” message, what should I do?

Though we’ve already found solutions to all common issues that might occur during migration procedure, and implemented them, sometimes a rare mistake can appear, caused by peculiar file types or file coding, absence or presence of certain extensions etc.

If this kind of error pops up during the transfer, it’s best to contact our Support Team right away. Having both of your stores at hand, we’ll surely fix the problem.

We guarantee that after running a troubleshoot once, the issue will be resolved for good.

Can I migrate data from stores installed on WordPress Multisite?

Yes, data can be migrated from stores installed on WordPress Multisite, but only in terms of Data Migration Service Package which includes assistance of Cart2Cart tech team.

Due to technical restrictions, however, such transfer won’t be available via automated migration.

I keep getting the “HTTP Error Occurred” message, what should I do?

This usually means that connection to your server can’t be established properly, or Cart2Cart’s Connection Bridge (file needed for data exchange) can’t reach your store’s database.

To fix the issue try the following:

If that doesn’t help, contact our Support Team - we’ll gladly help you find a solution.

The common reason of internal server error are incorrect permissions for bridge folder.

The reasons for the error may be the following:

Security Token for my store was changed. Why is it so?

When can I use my discount coupon?

You will be able to use your discount coupon on a step of full migration confirmation. Simply put a tick in an appropriate checkbox and enter the promo code. 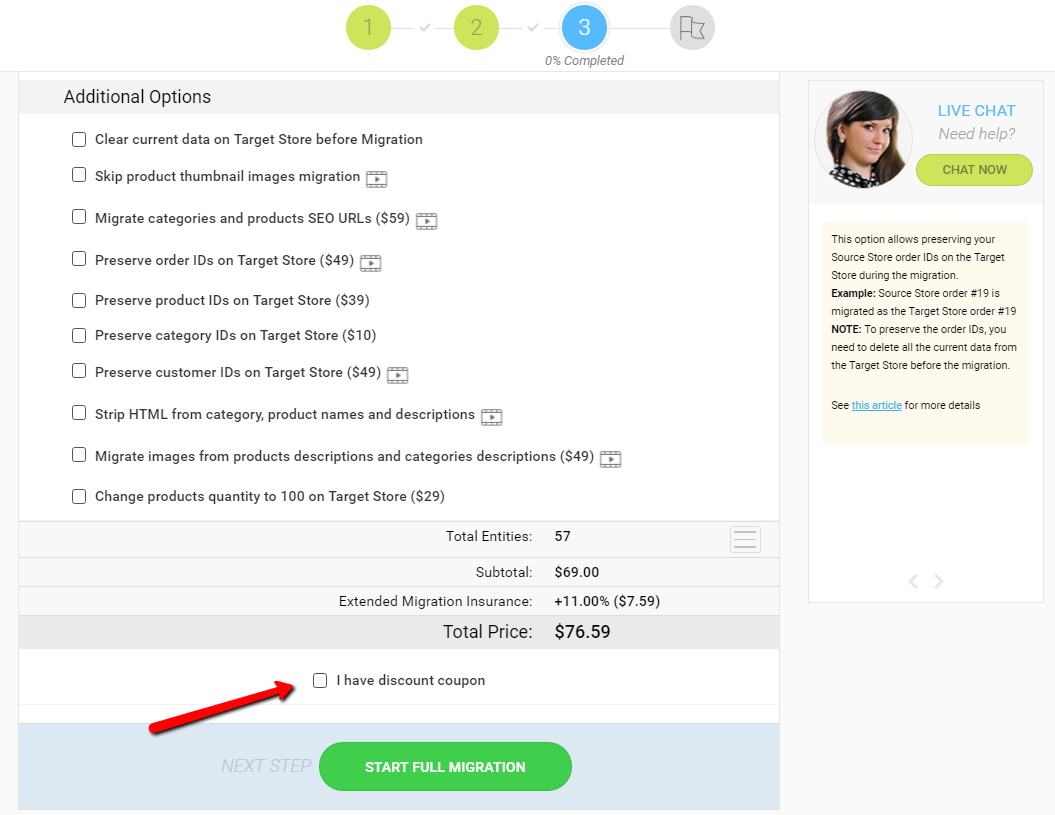 What I should do if my migration process stopped on 99% for a long time?

Sometimes, data transfer can proceed a bit longer than you’ve expected. If your Full Migration process stopped on 99% for more than an hour you should contact our Support Team. Please, do not implement any changes on the Target store.

What should I do if my store MySQL database is sending error responses?

My store structure is changed. What should I do to perform data migration?

Cart2Cart Service is designed for typical shopping cart structures. You may be not able to perform an automated migration, if your platform differs from the default one (deep customization including changing the database structure). However, our tech engineers will transfer all your data, if you purchase one of Data Migration Service Packages.

300 Multiple Choices - indicates multiple options for the resource that the client may follow.
301 Moved Permanently - This and all future requests should be directed to the given URL
302 Found - required the client to perform a temporary redirect (the original describing phrase was "Moved Temporarily")
303 See Other - The response to the request can be found under another URL using a GET method.
304 Not Modified - Indicates that the resource has not been modified since the version specified by the request headers If-Modified-Since or If-Match
306 Switch Proxy - No longer used.Originally meant "Subsequent requests should use the specified proxy."
307 Temporary Redirect (since HTTP/1.1) - In this case, the request should be repeated with another URL; however, future requests should still use the original URL.
308 Permanent Redirect - the request, and all future requests should be repeated using another URL.

400 Bad Request - the request cannot be fulfilled due to bad syntax.
401 Unauthorized - similar to 403 Forbidden, but specifically for use when authentication is required and has failed or has not yet been provided.
402 Payment Required - reserved for future use.
403 Forbidden - the request was a valid request, but the server is refusing to respond to it.
404 Not Found - the requested resource could not be found but may be available again in the future.
405 Method Not Allowed - a request was made of a resource using a request method not supported by that resource
406 Not Acceptable - the requested resource is only capable of generating content not acceptable according to the Accept headers sent in the request.
407 Proxy Authentication Required - the client must first authenticate itself with the proxy.
408 Request Timeout - the server timed out waiting for the request.
409 Conflict - indicates that the request could not be processed because of conflict in the request, such as an edit conflict in the case of multiple updates.
410 Gone - indicates that the resource requested is no longer available and will not be available again.
411 Length Required - the request did not specify the length of its content, which is required by the requested resource.
412 Precondition Failed - the server does not meet one of the preconditions that the requester put on the request.
413 Request Entity Too Large - the request is larger than the server is willing or able to process.
414 Request-URI Too Long - the URI provided was too long for the server to process.
415 Unsupported Media Type - the request entity has a media type which the server or resource does not support.
416 Requested Range Not Satisfiable - the client has asked for a portion of the file, but the server cannot supply that portion.
417 Expectation Failed - the server cannot meet the requirements of the Expect request-header field.
418 I'm a teapot - this code was defined in 1998 as one of the traditional IETF April Fools' jokes, in RFC 2324, Hyper Text Coffee Pot Control Protocol, and is not expected to be implemented by actual HTTP servers.
419 Authentication Timeout - not a part of the HTTP standard, 419 Authentication Timeout denotes that previously valid authentication has expired.
420 Method Failure - not part of the HTTP standard, but defined by Spring in the HttpStatus class to be used when a method failed.
420 Enhance Your Calm - not part of the HTTP standard, but returned by version 1 of the Twitter Search and Trends API when the client is being rate limited.
422 Unprocessable Entity - the request was well-formed but was unable to be followed due to semantic errors.
423 Locked - еhe resource that is being accessed is locked.
424 Failed Dependency - еhe request failed due to failure of a previous request.
425 Unordered Collection - defined in drafts of "WebDAV Advanced Collections Protocol", but not present in "Web Distributed Authoring and Versioning (WebDAV) Ordered Collections Protocol".
426 Upgrade Required - the client should switch to a different protocol such as TLS/1.0.
428 Precondition Required - the origin server requires the request to be conditional.
429 Too Many Requests - the user has sent too many requests in a given amount of time.
431 Request Header Fields Too Large - the server is unwilling to process the request because either an individual header field, or all the header fields collectively, are too large.
440 Login Timeout - a Microsoft extension. Indicates that your session has expired.
444 No Response - used in Nginx logs to indicate that the server has returned no information to the client and closed the connection.
449 Retry With - a Microsoft extension. The request should be retried after performing the appropriate action.
450 Blocked by Windows Parental Controls - a Microsoft extension. This error is given when Windows Parental Controls are turned on and are blocking access to the given webpage.
451 Unavailable For Legal Reasons - defined in the internet draft "A New HTTP Status Code for Legally-restricted Resources".
451 Redirect - used in Exchange ActiveSync if there either is a more efficient server to use or the server cannot access the users' mailbox.
494 Request Header Too Large - Nginx internal code similar to 431 but it was introduced earlier.
495 Cert Error - Nginx internal code used when SSL client certificate error occurred to distinguish it from 4XX in a log and an error page redirection.
496 No Cert - Nginx internal code used when client didn't provide certificate to distinguish it from 4XX in a log and an error page redirection.
497 HTTP to HTTPS - Nginx internal code used for the plain HTTP requests that are sent to HTTPS port to distinguish it from 4XX in a log and an error page redirection.
499 Client Closed Request - used in Nginx logs to indicate when the connection has been closed by client while the server is still processing its request, making server unable to send a status code back.

How to create customer groups?

To create customer groups in Magento you have to go to Customers -> Customer Groups and click Add New Customer Group in the top right of the page.

To create Customer Groups on PrestaShop, navigate to Customers -> Groups . There you will see 3 default Customer Groups - Visitor, Guest and Customer. To create a new one click "Add New" and fill in a form.

To create a new Customer Group on OpenCart, go to the Sales -> Customers -> Customer Groups page . Above the list, click the "Insert" button. There you will have to provide Customer Group Name, Description, approve or disapprove customers logins into their store account, allow the customer to select their company no. or Tax ID. 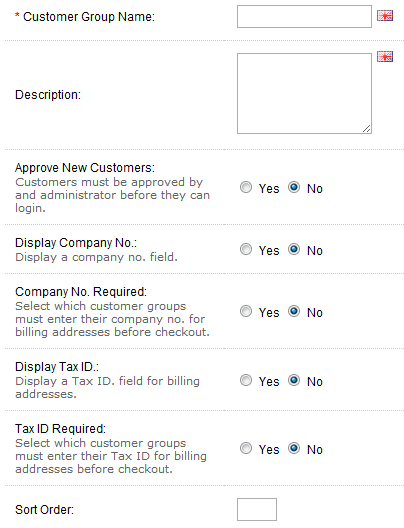 Possible reasons for the error are:

Server is temporary unavailable and cannot process requests. The reason may be technical maintenance or overload. For more details on the issue contact your system administrator or hosting provider Support. END_OF_DOCUMENT_TOKEN_TO_BE_REPLACED
More info

Cart Type you have selected is invalid or some required database tables are missing/corrupted!

You have chosen the wrong shopping cart type from the list, or the cart version is not supported. Also the error occurs when the cart is modified. If you are sure that the cart type is correct, contact Cart2Cart Support. END_OF_DOCUMENT_TOKEN_TO_BE_REPLACED

The request for the server is too large.

Possible solutions for the issue are:

If you have such error, try the following solutions:

Please, make sure you have uploaded a Connection Bridge to your store root directory. You can check if the Connection Bridge files have been installed correctly. To do that enter http://[yourstore url]/bridge2cart/bridge.php within your browser address line. If the message “BRIDGE_INSTALLED” appears, it means the bridge files are working correctly. Otherwise set the permissions as following:

If you face some troubles while setting the permissions, please contact our Support Team.

Store images directory is not writable or doesn't exist.

Please, create image directory and set the write permissions (chmod 777) to it and to ALL subfolders/files it contains. The reasons for the error can be the following:

Default language is not specified

In the case of such issue you should check the language configuration on your store. The shopping cart must have at least one language used by default.

If you cannot connect to host, pay attention to the following points:

Web browsers request for information from the server, and when it is performed, it sends an Accept header. In case if the server is not able to send that data in the requested format in the Accept header, then the server sends the 406 Not Acceptable error.

The 406 error can appear accordingly to your mod_security rule on the server. Mod_security is a security module of Apache web server, usually permitted automatically on all hosting profiles. In case if a site, page or even function violates one of the rules, server can send the 406 error.

You can turn mod_security off. Also, there is a possibility to disable a specific rule or each domain individually. Thus, if you wish to disable mod_security, go to mod_security using modsec manager plugin in control panel.

Note: There may not be the option of turning mod_security on/off in your cPanel or dedicated servers. In such cases, use command line using SSH or contact tech support to enable/disable this option.

If you have any questions, contact Cart2Cart Support Team and get all the answers in no time.